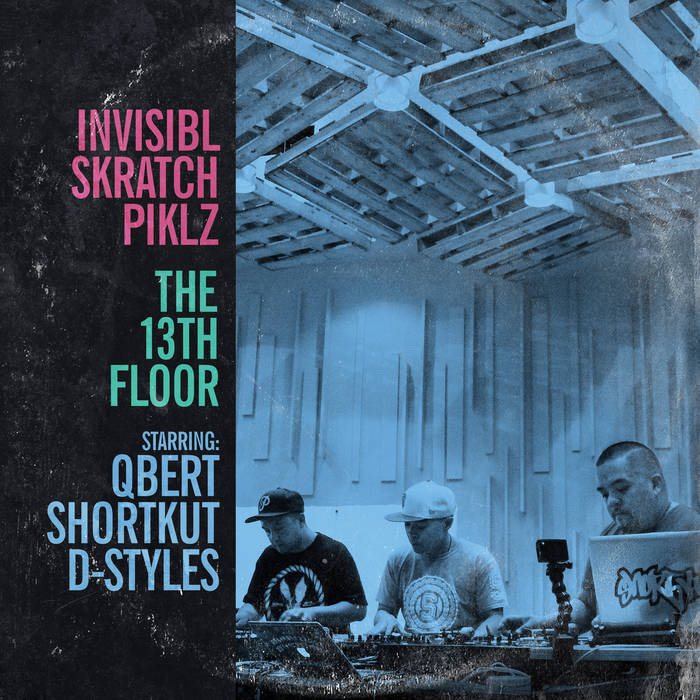 @willemmaasdam The Beatles of Turntablism! Favorite track: The Freestyle Fanatic.

Nic Brown Much instrumental hip-hop of exceptional quality has seen the light of the day in 2016 thus far from "Anxiety Skits" by Sam Zircon and "Bad Tidings" from Spektre, both collections of beats that go bump in the night, to George Fields's immaculate "Beyond Realm", but if you're looking for the wackiest offering the genre has produced, look no further than "The 13th Floor" by Invisibl Skratch Piklz (the name of the crew responsible alone should give you an idea we're moving in the opposite direction from the mainstream faster than the speed of light) Qbert, D-Styles and Shortkut who comprise this insane production posse are obviously masters of their craft (whatever it is) and it's certainly no lo-fi ragbag cobbled together after a week spent consuming a kilo a day of the most potent weed in the world. It's a hi-fi ragbag cobbled together after 6 months spent consuming 3 kilos an hour of the most potent weed in the world. That said, one wonders what skills are required to produce a track like "Polka Fist Pump" whose beats seem to have been created from samples of a car being smashed to smithereens by sledgehammers, or "Fresh Out Of FVCKS" which begins with a portentous sample of Bach's Toccata and Fugue in D Minor then rapidly descends into a deeply unpleasant mess of crashing and shouting. What irks me so much is there are tantalising glimpses throughout "The 13th Floor" (which the accompanying publicity notes describe as "a heavy jazz homage to what DJing is really about", something that's akin to saying that Iron Maiden don't fuck about when it comes to the Balearic portion of their set; that Nicko McBrain can shake his maracas twice as fast as Bez ) is that these three reprobates are obviously talented musicians, who instead of putting out the album they were capable of, got pissed on paint thinner spritzers, arsed about for half an hour ("you twiddle that knob, I'll kick fuck out of a synth") and chose to release that instead. Am I being harsh? Well, Liverpudlian rapper Morriarchi created a serious contender for hip-hop album of the decade in a similar state on a budget of about £3.50. By the way, if you haven't yet bought The Buggzville Sessions, do not pass go, do not collect £200, go straight to your nearest record shop and hand over the ackers for the fucking thing. I purchased this album in good faith and got two earfuls of shit. Seriously, if I bump into D-Styles, he'll be altering his stage name to E-Masculated. I'm not typing that fucking ridiculous name out again but if you all happen to bump into each other in another 16 years, make an album that sounds like you really are "the most innovative musicians in the world" as you sleeve notes claim you are rather than three 4 year olds who sneaked out of kindergarten, broke into a recording studio, turned the lights off, donned boxing gloves and smashed the place to bits. A more useless trio of cunts you will never meet. And I bought it. So which of us is telling the truth?

Universally acknowledged as some of the most skilled scratch DJs in the world, turntable legends the Invisibl Skratch Piklz are releasing their first ever full-length album: The 13th Floor.

After nearly 16 years apart, original members Qbert, Shortkut, and D-Styles have come together again to record The 13th Floor. Composed with a heavy jazz sound in mind, the roughly 35-minute LP is an amazing homage to what true DJing is – and the perfect embodiment of the iconic Invisibl Skratch Piklz sound.

Recorded using three DJ mixers and three turntables, the album showcases the trio’s deft skills and inspired talent, and displays how they have progressed and perfected their sound all while pushing the art of turntablism into brave new dimensions.

The 13th Floor deftly blends the abstract artistry of scratching with undeniable musicality: lush synths, warm horns, solid basslines, and fat vibes. It’s easy to feel “Fresh Out of FVCKS” – a track that creeps up the keys and slowly shoves its way in. “Kenny G’s Perm” is surprisingly relaxed, a mellow and sludge-covered jam. From the aggressive roughness of “Polka Fist Pump” to the thick sound of “The Freestyle Fanatic,” the LP flips, knocks, twists, and finds truth on the turntables.

Fusing elements of jazz, rock and hip hop, the album demonstrates true artistry, creative composition, and masterful turntablism. The 13th Floor solidifies that no matter how much time has passed, the Invisibl Skratch Piklz are still among the most innovative musicians in the world.

Alpha Pup Records & Digital Distribution is a boutique music distributor located in Los Angeles that represents over 40 of the world's top independent labels. Bold and forward-thinking, Alpha Pup is an outlet for daring and experimental sounds from some of the world’s most creative musical minds, spanning all popular genres. ... more

Bandcamp Daily  your guide to the world of Bandcamp